I always wish I had more, but when I get it I never really know what to do with it. I'm a compulsive list maker, in fact, making to do lists is pretty much a daily ritual. Luckily I was pretty productive with my free time today, and I've got all of my chores lined up for tomorrow. Now I'm just winding down, making dinner, and waiting for the evening to start. I don't have to get up early tomorrow - and I got to sleep in until 8:30 this morning! - so here's for finally enjoying my evening. 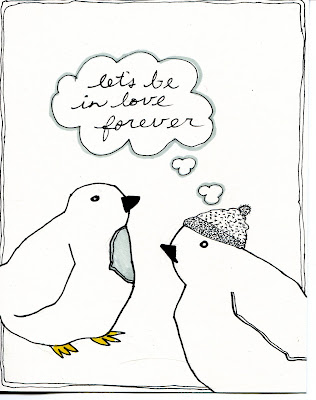 After posting that picture of the pom pom toque in my last post, I figured I'd throw one on this little guy. 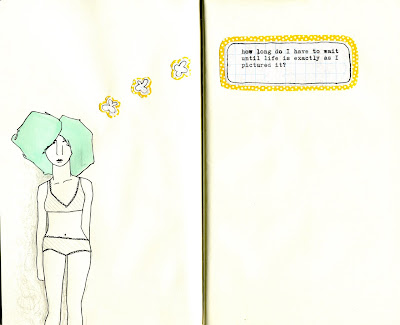 Another spread for my sketchbook project book. I want to incorporate a few pages of straight up text, and I used to write a lot more, but I tried writing for this page and I couldn't come up with anything. The thought bubble on the right side was supposed to take up the entire page, which I thought would be pretty neat looking, but when I went to write it I couldn't come up with a thing! This will be my goal for this project - I want to re-learn how to write a page of text.
Posted by tori at 7:22 PM 5 comments:

Well, it wasn't exactly stormy today - just a little soggy - but it felt like one of those days where I just wanted to stay on the couch wearing a big sweater and watching crappy tv or movies - or crappy movies on tv. Unfortunately, I worked all day and am going to bed at 10:30 because I have to get up at 5 again tomorrow. C'est la vie. Anyway, I just wanted to do a quick little post before my art post on Wednesday (my next day off).
Since it was cold and rainy out today, and it is now officially autumn, I figured I would indulge in a little bit of girliness and post some cozy fall clothes I wish I could afford. 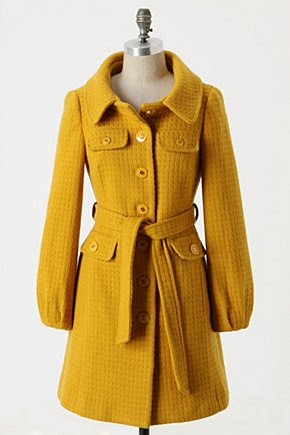 This coat from Anthropologie is so pretty, and I love mustard yellow.

This dress from modcloth is cleverly disguised as a trench. I've decided the one new fall item I buy this fall is a trench coat. I think everyone looks good in one and it always looks dressy. I think I would feel like a real live grown-up wearing one, instead of a high school student in one of my well worn hoodies. Not that there's anything wrong with hoodies.

This hat is also from modcloth. Last year, my cat ate the pom pom off of my favourite toque. If I buy a trench for fall, I am definitely getting a new pom pom toque for winter.

Check back Wednesday for new art!
Posted by tori at 10:15 PM 2 comments:

Why is time going so fast?

Every time I check the date, I'm amazed at how quickly September is coming along. The list of things I want to do is growing and my time and determination are growing slimmer and slimmer. I've mentioned my work schedule recently, and to repeat myself, I usually work from 6 am until 2 or 3 pm, four or five days a week. It's nice getting done early in the day, but getting up at 5 leaves me wiped out. I always intend to come home, take a half hour or hour long nap, and then tackle the rest of the day, but I usually end up in front of the television, watching the sad transition from daytime to prime time programming. This evening, I intended to complete this post (almost there!) and then write the proposal for a sort of long term project I'm working on. I'll elaborate. This year, I was all set to start at the University of Toronto to get my bachelor of education, so I could teach secondary school. Sometime in July, I decided to give up that opportunity and spend this year working, applying for Master's programs, focusing on my creative work, and doing an independent study through York University (where I got my undergrad).
The independent study is what I have to write the proposal for. Basically, I'm writing my own course, including syllabus and reading/projects list, and then I work alongside an instructor who supervises my progress. I'm really excited about it, but I really wish I hadn't left my proposal for so long.

Anyway, I've got some art - 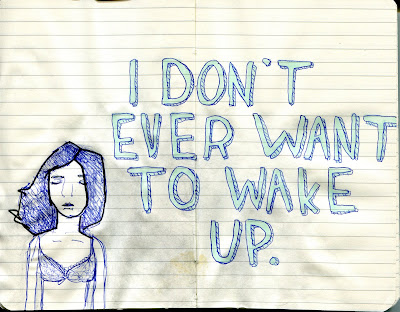 I did this while waiting in line for one of my TIFF screenings. I was feeling pretty tired then, as I am now. 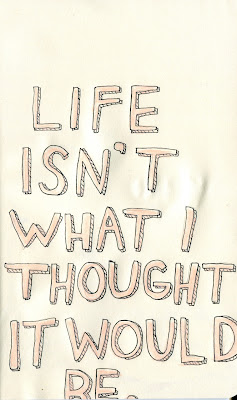 This is the first page of my sketchbook project book. My chosen theme was great hopes and massive failures, fitting given my usual themes and current state of mind. I'm looking forward to filling the rest of the book, and hopefully venting about some of my great hopes (and maybe a few of my massive failures) 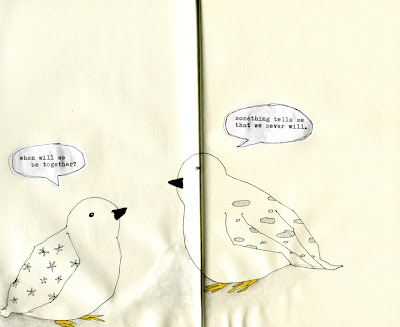 Another page of my sketchbook project book. I still have to tweak my scanner a bit to get the optimum quality from these drawings. I plan on scanning every page of my sketchbook and compiling them online (rather than pay the extra money to have the project facilitators do it). Any suggestions for me and my scanner? Let me know.

Anyway, that's all for now. I'm planning another "inspiration" post, or another fun list of things I've found online, but for now I've got a proposal to write.
Posted by tori at 5:51 PM 2 comments:

I've been feeling a bit like the walking undead recently - I've been attending screenings at TIFF (Toronto International Film Festival) and although I'm only doing a measly 10 screenings (a lot by most people's standards, but nothing compared to my boyfriend's 30) I'm exhausted. I considered going to bed tonight at 7pm. I've attended three of the midnight madness screenings so far, and for those unfamiliar, these are screenings that start at midnight and are usually genre movies - horror, fighting, and otherwise more crazy and zany stuff than the regular festival programming. On the first night, I was at the (world?) premier of Fubar 2, which by the way, was awesome, and made me weirdly patriotic for my small town redneck Canadian upbringing. And the cast were there. In character. The next night, I saw Super, which has a similar premise to Kick Ass (a regular guy decides to become a super hero) but it was really dark, pretty messed up, and starred Rainn Wilson and Ellen Page. It was also awesome. And Rainn Wilson was there! (and I totally heart Dwight).
I'm not one of the celebrity crazy people at the Festival, and there are lots, but it is cool seeing the movies in the same room with the people who made and starred in them. Last night, we were at the screening for Our Day Will Come, which was directed by the guy (Romain Gravas) who directed the video for MIA's Born Free and it was, therefore, pretty crazy. And we were sitting right in front of Vincent Cassel!

Anyway, the combination of Festival-ing and work (for which my regular shift is 6am-2pm) has left me pretty drained. I haven't been able to get around to my drawings, but I wanted to do a post nonetheless. I figure since I've had movies on the brain (and itinerary) lately, I'd do a post on films. The Film Festival has released an essential 100 films list, and though I've only seen a quarter of them, I thought I'd do a little post about three of my favourites. 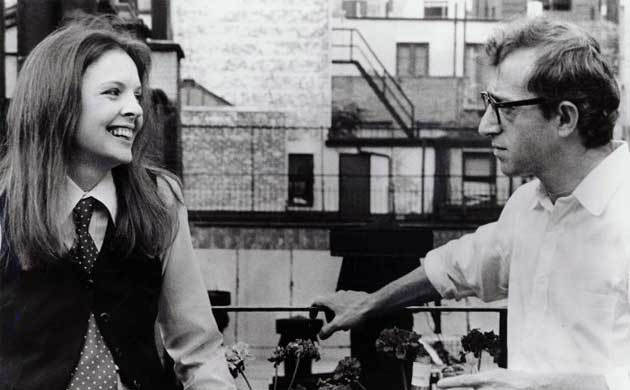 Annie Hall is my absolute favourite romantic/relationship movie. I'm not going to go into a synopsis or anything, but I love it because it doesn't really have a happy ending. If anything, it's bittersweet and I suppose I'm a sucker for things not always working out the way you want in movies.
Also, as someone who's almost as neurotic as Alvy Singer, and sometimes as ditzy as Annie Hall, I feel kind of like I can relate. Oh, and Annie and I share a pretty serious case of arachnophobia. 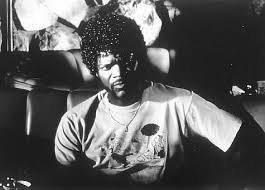 I know that everyone loves Pulp Fiction. Well, whatever, I'm one of them. Since my boyfriend and I stayed up all night to watch this movie soon after we met, it's sort of become "our movie". Which is cheesy, I know, but I could watch this movie over and over. Seriously, whenever someone says something smart I think to myself "check out the big brain on Brad" and when I make coffee in the morning, I think "I buy the gourmet expensive stuff because when I drink it, I want to taste it." 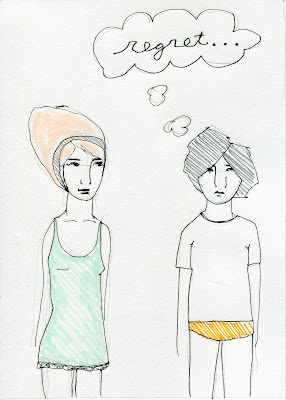 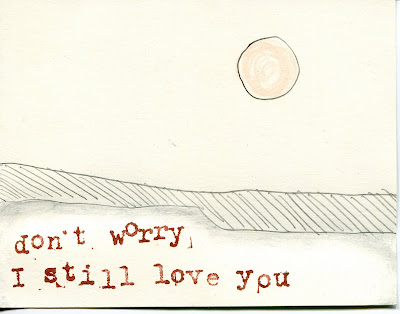 My drawings for the week, and don't hold it against me that the bottom one is smaller than 5 x 7 (it's 4 x 5.5). I bought a bunch of pieces of 4 x 5.5 inch cardstock a few years ago and never put them to good use, so it seems now's the time.
Anyway, it'll be a short post today as my Labour Day has turned out to be quite laborious. And my day-after-Labour-Day will be too. Yawn.

Inspiration for the Week: Interior Design

I've mentioned craftgawker here before as one of my favourite places to go for great craft and art images and ideas. And foodgawker is my go-to place for when I'm feeling both hungry and masochistic...it's just a collection of awesome, drool inducing pictures of food (and links to the blogs that originally posted them, usually with recipes). They have now recently launched dwellinggawker, as if I needed a new place to waste my time! I decided my little weekly list of things I like from around the internet would come from dwellinggawker.

I've decided on a little side project recently, and that's giving our room a little makeover. When we moved back in May, our room just kind of got all of the stuff that didn't fit in the living room, without any rhyme or reason. It's kind of a mess. I'd like to spend some of my free time this fall making our room a little nicer looking. My love for the grey-yellow combo would, I think, be a good place to start. This image (and the one below) from design*sponge, via dwellinggawker.

My last two apartments haven't had anywhere to put a kitchen/dining table. I'll just look at this picture and sigh, one day... 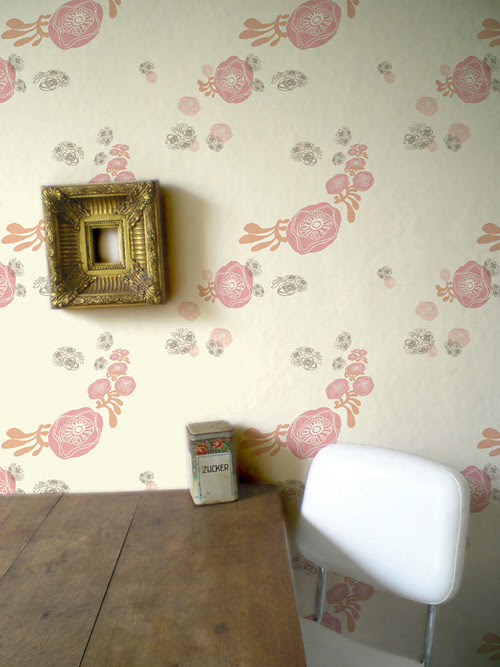 I don't think it comes as a surprise, I love wallpaper. And I really love this one. Like, floral jellyfish?! What could be better? If I had the money and confidence, all of my walls would be covered in wallpaper. As it stands, my walls are just plain white. But at least I can live vicariously through the internet.
This, and a whole bunch more found here

Post with my two drawings for the week to follow. Later.
Posted by tori at 10:10 AM No comments: